Practical Uses for Mindfulness; or “The Dog Who Bit My Bum”

You are here:
Mindfulness 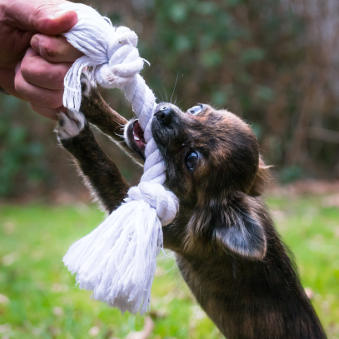 Note:  Conventional wisdom (aka my wife, who knows much more about blogging than I do) says that blog posts should be no longer than 500 words.  This one is double that, and then some.  My apologies; I just don’t want to split this one in two. Hopefully it is interesting enough to make it worth the longer read.

I love dogs.  It came as no surprise to me in recent years, to learn that therapy dogs are now used to help with PTSD.  Among other helpful things, the dogs are trained to sense their human’s distress, and provide snuggles to calm their human.  This brings a tear to my eye.

My first dog, on the other hand, would have flunked out of PTSD support school.

I was well into adulthood when I got him, and quite frankly, I had no clue about dogs.  He was a young adult from the local shelter.  He came pre-loaded with a number of quirks, one of which involved tip-toeing up behind me when I was not paying attention, and nipping me.  As a roughly knee-high dog, his pincer-like front teeth were at a comfortable height to snag the flesh on the back of my upper legs, or if he decided to jump a bit, occasionally my butt.

Imagine if you will, someone with a pair of pliers clamping down on a bit of the skin of your behind.  The hamstring area, as I discovered, is one of the more tender areas of the body, ill suited to sharp pressure.  I found my dog’s behaviour… unpleasant.

If I remember correctly, the first time this happened I was raking leaves.  The burning pain which suddenly flared in the back of my leg shocked me.  I responded as any calm, enlightened therapist might; I whirled around and chased my dog, rake raised high, screaming incoherently.  This, I later realized, was pretty much what he wanted.  Chase me! Chase me!

To him, this was fun.  By the time I finally caught on, I had already succeeded in strongly reinforcing his delightful behaviour.

Recognizing that I had no idea how to stop him, and not wishing to change my wardrobe exclusively to lederhosen, I cast about for a solution.  In graduate school, I had learned some things about pain management (these days, it would fall under the term “mindfulness,” but in those days, that term had not yet come into vogue).  The ideas seemed a bit odd, but I was starting to feel a bit desperate, and I figured that I had nothing to lose.

So the next time “Man’s Best Friend” inflicted pain upon me, I set out to follow a 2-step process.  These two steps are:

As you might imagine, this was not easy.  How does one describe pain?

Well the dog was a good therapist in his own way, and he provided me with plenty of opportunity to practice.  Slowly, with lots of frustration, I began to find ways to describe the pain.  First of all, I could compare it to other kinds of pain.  Dog teeth pinching skin provides a different pain than slipping on ice, and falling on your butt (even though the same general region is effected).  Getting nipped is a sharp pain, felt in a tiny, precise location; landing on your butt is more of a dull pain, and is felt across a greater amount of… yourself.

There are actually many words to describe pain; like searing, achy, shooting or tingling.  This article offers many different ways to describe pain.  It is quite possible to get creative, using the 5 senses. I could “see” the pain; as a point of bright red/yellow light in my leg.  I could “hear” the pain; imagining that if it had a sound, it would be high-pitched and piercing.  Never really got around to smell or taste…

OK, so right about now, you might be thinking, “This is weird. What’s the point?”

Glad you asked.  See, I was never really a tough guy.  I didn’t laugh at pain.  I didn’t keep going when injured.  To be honest, I was a bit of a pain wimp.  That’s why I reacted so strongly to my dog nipping.  It scared me.  I wanted it gone, and I never wanted to deal with it again.  That gave the pain (and my dog) a lot of power.

As I worked on this focus-and-describe stuff, something happened.  As a nerd, I had really hoped it would give me amazing mental powers to turn off the pain receptors in my body (and even better, to pull distant objects into my hands, like a Jedi…)  Sadly, none of that happened.  What did happen was still pretty cool.

I lost much of my fear of that particular pain.  In turn, this greatly reduced its power over me.  My beloved canine companion would nip and dash away, looking over his shoulder for the chase.  He started to get disappointed.

I stopped freaking out.  I stopped chasing him.  It got to the point where I didn’t even pause whatever I was doing.  “OK,” I would think, “there it is.  That pain thing.  Whatever.  I can handle it.  It’ll pass.  Heck, I can describe it in 15 different ways!”

Did I feel the pain less?  No.  Did I become a super tough-guy, who faced any imaginable pain with a smile?  Nope.  But I gotta say I was pretty pleased with how well it turned out with the whole dog-nipping thing.  (He eventually gave up in frustration.  I didn’t feel bad for him.)

So.  This practice is not limited to physical pain.  It can be used for all manner of stuff which happens within the confines of our bodies.  Sensations of any kind.  Emotions.  Even thoughts.  This generous therapist has helpfully provided two lists of descriptive words for sensations and emotions.  A cheat sheet to help when stumped.  Thanks Hilary!

So next time your dog bites you; or more realistically, next time you feel something which really bugs you, I invite you to try this odd-sounding practice.

Now, using it one time is very unlikely to produce amazing results.  Please don’t try this for five minutes on a Wednesday, and send me hate mail on Thursday saying, “I tried your useless strategy, and it totally failed!”

It is not all that different from learning to skate or play guitar; the first time you try, you’re not going to shine.  With some practice however, it won’t be all that long before you start to enjoy and feel good about what you have learned to do.

To Fear or Not To Fear
March 28, 2020
call_or_email Call or email Chris for an initial consultation.